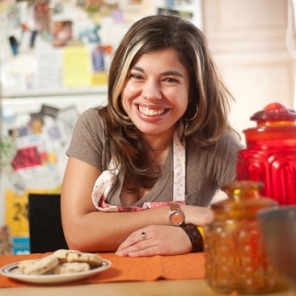 What, you may be asking, gives me the authority to write a blog such as this? Nothing. I’m just a girl from New Jersey with a bunch of passions who loves writing and living and wants to share that love for life with the world. But I’ll tell you a little about me, just in case you were curious.

I studied Baking and Pastry at the The International Culinary Schools at The Art Institute of Philadelphia. My confectionery creations have been featured in print in the book 1,000 Ideas for Decorating Cupcakes, Cakes, and Cookies by Sandra Salamony and Gina M. Brown, and numerous times online in the popular blog Cupcakes Take the Cake.

I have a Bachelor’s degree in both English and Art History from Rutgers University. I’ve contributed posts to  the popular fashion blog,  What the Frock?, and  the inspirational site, Tiny Buddha, and some of my photography can be seen on the tourism site for the city of Framlingham, England (that’s my photo across the top!).

I’ve run 6 half marathons, and won my age group in two 5Ks. I plan to run a full marathon for the first time this year.

I wrote and self-published a cook book also titled “Small Indulgences,” which features recipes, ideas, stories, and photos from the blog to inspire and delight. The book is available for purchase in printed form here, and in e-form for download on Apple’s iBookstore, Amazon, and Barnes and Noble.

I’ve been singing since I was about 3 years old, and used to perform in the backyard on the swing set for the the neighbors. And by “perform” I mean sing as loudly as possible so the neighbors had no choice but to listen. These days I perform on stage with the Cabin Dogs and with SezHu, and I recorded an album as 1/2 of a duo called Morgen-Reed.

I love eating cheese. My favorite is Vlaskaas. And Parmigiano Reggiano. And Aged Havarti. And Aged Cheddar with Irish Whiskey. And Gjetost. And Barrel-Aged Feta. See?

I practice yoga at Yogawood. I should go more than I do. I’m working on that.

I have a cat named Gandalf the Gray, who’s been my partner in crime since 2003.

And that’s about it.

PS: I like pina coladas and getting caught in the rain.